When it comes to interchangeable knitting needles, this is what I like:


That combination means Chiaogoo to me, with Twist cables.

I have used Addis, but I don't like the cable, and I find that fine yarns (which is almost exclusively what I work with) catch on the joins. That's annoying, and increases wear and tear on the yarn. I've never used the interchangeables, because they stop at 3.5mm and most of the needles I use are smaller than that. I actually have a whole bunch that I will be de-stashing soon.

I just cannot get Hiya Hiya interchangeables to stay tight, so I'd never use them for lace, and that's pretty much everything I hand knit. I have 2 sizes and 2 cables, and rely on the husbear to tighten them up, but it's still not enough. I'm also not a fan of the swivel cable because I'm not sure what it's supposed to do for me. Once I finish my Apex cardigan, I'll be de-stashing these too.

I am of the opinion that Knit Picks has poor quality control and makes cheap, but not decent, products. I started with these, and returned so many cables because they were so badly finished, you could see 'spurs' of plastic on the cables. The joins are not very good either. I do understand that many people start with them because they're cheap, but I would recommend spending more if you can.

Pony and Aero are actually worse than Knit Picks. Since taking up knitting again as an adult, I am pretty sure that if those three were my only options for needles, I would have quit. Pony do actually make pretty decent tapestry needles though.

Tulip are marginally better than Pony or Aero, especially if you would like bamboo needles.

I'm going to briefly cover the things you want to think about when it comes to buying circular knitting needles. I haven't used straight needles as an adult, and don't intend to.

Material determines the stiffness and tensile strength of the needles. Knitting needles are actually better with a bit of give to them, and shouldn't be too stiff. It also factors into how smooth they are.

Wood and bamboo are both light, and they warm up with use. But, they break easily. I broke at least 3 wooden needles before I switched. They are also more grippy, which is good if you're prone to dropping stitches or knit with slippery yarn. The Kinki Amibari bamboo are actually rather nice, just too grippy for me to knit with any speed.

My preference for stainless steel is because it's possible to achieve a very pointy end, be polished to be super smooth and not break easily, even if they're hollow.

I've never used carbon fibre, and think you should probably toss the plastic ones altogether.

I use these for small circumference knitting in the round. I find that it's faster and less hassle than circulars, even though I'm perfectly comfortable in magic loop.

I primarily use circulars because I tend to knit very large pieces and also like to knit in the round. I find that circular allow you to rest the bulk of the weight of a piece on your lap, which strains my hands less.

I used to think I would need to do a lot of linelines, but the truth is I almost never do. So I'd suggest going for fixed needles instead because the joins are often smoother.

Generally speaking, you want a soft, flexible cable. Some of them have swivel joins, meaning that they rotate in the join, but I am not actually sure why that's any good.
Posted by Mathemaknitter at 04:42 No comments:

May Made: Helaine Cardigan 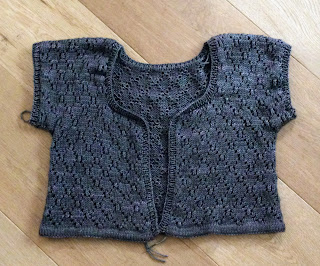 I made my first cardigan, and just in time for spring too!

It was a test knit from Laura Patterson, and as usual, you can find the pattern on Ravelry: Helaine.

The knitting itself was pretty straightforward, and suitable for an adventurous beginner. If you're a mad lace knitter like me, then this would be a nice break from more intricate lace. 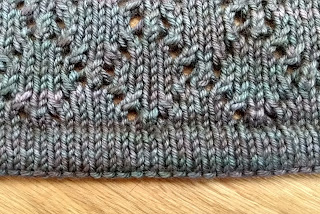 One of my favorite design elements on this piece. The little ridges are formed by knitting a garter ridge at the point where you fold the hem over.

I have done folded hems on the knitting machine, but this is the first one I've done by hand. Next time, I might try sewing it shut rather than knitting it together.

The other modification I did was to use a three-needle bind-off across the shoulder seams. I don't mind seaming, but binding off and then seaming uses more yarn than a three-needle and I was afraid that I was running short on yarn.

Photo from Posh Dee who takes much much better photos than I do.

I used a merino-yak-silk DK from my much-loved Posh Yarn, called Be My Shelter From the Storm, and I used the best part of two skeins. It's one of those multi-colored greys that has bits of lilac and turquoise, and looks much nicer in person.

It is heavier and less drapey than the original called for yarn, which is pure tencel, but still next-to-skin worthy.

I'm thinking of making this again, but I might modify this pattern to be knit in the round and then steeked. Plus, I might use a different method to pick up stitches.

My Ravelry project for those who are so inclined. 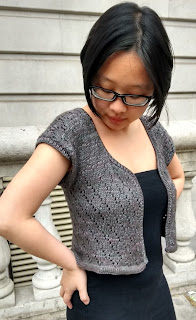 I'm wearing a black jersey tube dress underneath, but I think it would actually look better over a long-sleeved dress or top. I have not mastered the art of taking a selfie, or I would post a picture of that too. 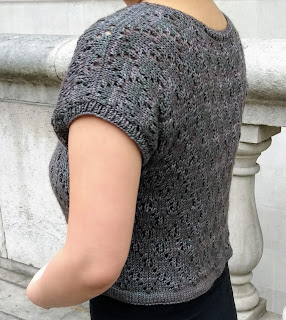 Still outside the Wellcome Collection. This is probably my favorite shot of the ones we took. It was too cold to take very many of them.

I love how it looks from the back more, but I would blame that on the fact that my finishing skills are not up to par, and there's less of that from the back.

I actually forgot how much I like little cropped cardis. When you buy off the rack, and you're petite, cropped things become regular things. Another reason why I'm making more of my own clothes.

I already have another one on the list to be made: Andi Satterlund's Blaster, but if you have any other suggestions, please let me know! :)
Posted by Mathemaknitter at 08:05 No comments:

Email ThisBlogThis!Share to TwitterShare to FacebookShare to Pinterest
Labels: cardigan, hand knits, May Made Monday

I have a million pins and blocking wires, and half a dozen of these plastic mats. 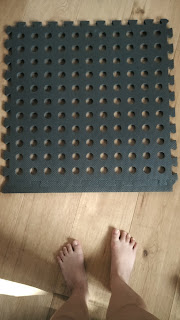 If you are in London and would like them, you can totally have them if I have not yet disposed of them.

I thought about what I liked about those mats:


But what I did not like about them was:
I have seen quite a few how-tos to make your own blocking mats, but most of them have it backed by a piece of wood or foam board. That would prevent me from storing it easily, and I was concerned about the wood getting mouldy over time.

My inspiration actually comes from cloth diapers for babies. They need to be absorbent and prevent liquids from leaking through the material, just like for my blocking mats. They are also easy to clean, can be washed, bleached, whatever. 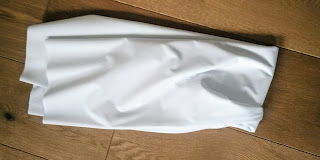 Bottom layer: PUL, just like for diapers. I was originally going to just buy whatever was cheapest, but I went with white in the end because they might be handy for taking pictures. 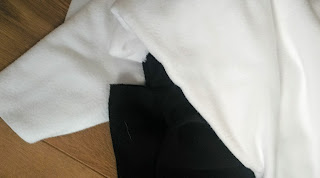 Middle layer: Microfleece. This is the absorbent layer. You can also use old towels, and probably even an old duvet. I have two colors only because I was buying remnants. Nobody will see them, and it is easy enough to piece them together. 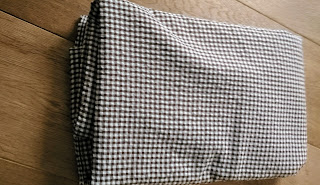 Top layer: 1/4 inch checked cotton. The main thing is that it should have regular lines/squares, and be safe to iron. You might also consider getting fabric that is very contrasting with the colors you usually knit, as that would make it easier to see.

In addition to the list above, you will need basic sewing supplies like needles, thread, fabric pens or chalk, and a ruler. You can quite easily make this by hand, but having a sewing machine would be much much faster.

I'll be back later this week with my first prototype. I'm making one that will be just the right size for swatches.
Posted by Mathemaknitter at 09:49 No comments:

I am MAD about Knitting Lace Shawls

Lace shawls were my gateway drug to knitting. 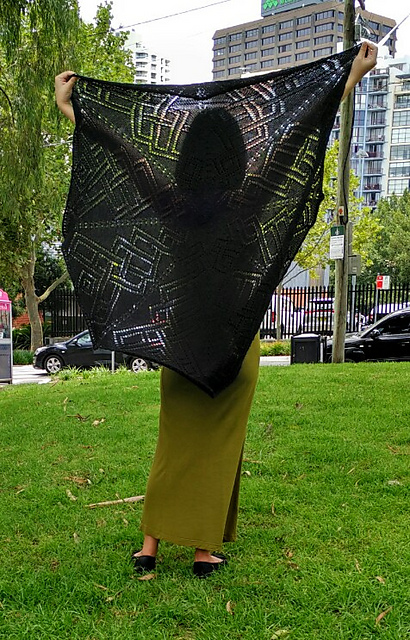 Izar was my first. I still have it, though I think about making it again in nicer, less pilly yarn quite often. The designer, Holly Chayes, is also one of the inspirations for this blog.

I have a few in progress at any one time. I've finished 2 in the past two weeks, and promptly started another 2.

I have made 4 for me so far. At least half my projects are lace shawls, for no reason other than I love knitting them. It is not as though I will wear all of them at the same time.

Oh, that's an idea! I shall take a picture of me wearing all of the ones I finished for me this year in December. I hope I remember! I have finished a red and a blurple already, and I have an orange, a turquoise and two green shawls to finish. Never mind all the ones I am certain I will start.

In the meantime, here's a teaser photo of my most recently started lace shawl: 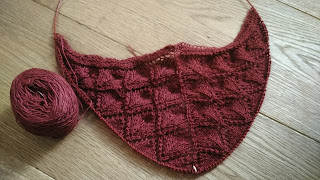 I am knitting Manitoba in Quince and Co. Piper, colour Caracara. I bought in August last year at Loop and have been looking for just the right pattern ever since. If you would like to keep track of my project, my Ravelry project page is Paying the Piper.
Posted by Mathemaknitter at 16:22 No comments:

A bactus is a traditional shape for Russian Orenburg shawls. It is basically a very shallow rectangle, with increases every 4th row rather than every 2nd.

I just finished this one last week. 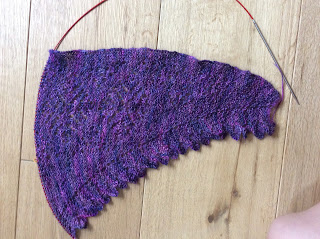 This is the only WIP photo I have, mainly because I knitted it in 6 weeks.

As you can see, it is a very shallow triangle. At the deepest point, it is approximately half a meter wide, and from end to end, approximately 2.4m long. 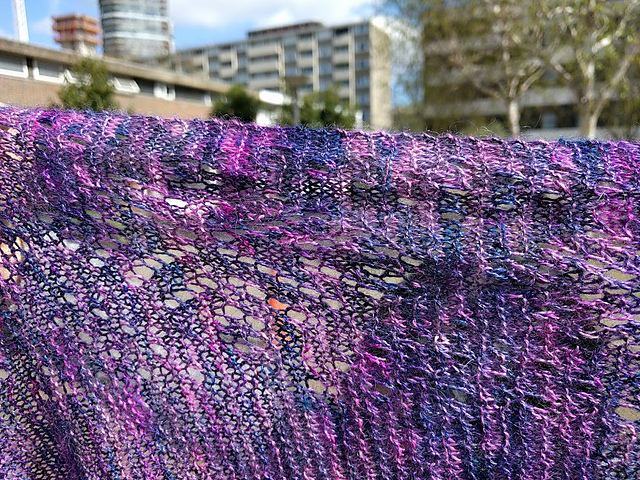 Close up of the lace. I am aware that the variegation distorts and hides the lace somewhat, but I loved the look of the yarn in garter stitch so much that I decided to run with it anyway.

It's knitted in one of my favorite blends: alpaca silk cashmere. This particular one is a Miranda Lace from Posh Yarns. By my count, I knitted about 70 thousand stitches and just over 800m of yarn.

I have named the project Bactus #1 but I think Orenburg #1 would have been better. I am not a very big fan of this shape, as it would need to be incredibly long to become as deep as I like my shawls to be.

I have therefore mostly worn it as a scarf, wrapped many times around my neck.
Posted by Mathemaknitter at 09:01 No comments: