I hilariously wrote the entire post calling it May Made May before I realised that was actually Me Made.

I added 4 dresses to the pile by the end of it. 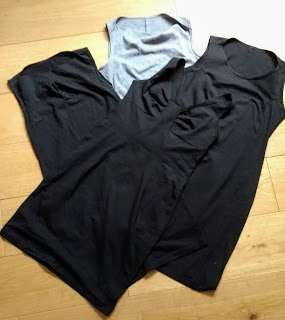 This was the best picture I could take that included all 4 of them. I will hopefully write more in the coming weeks.

I made the dresses in the picture with the guidance of Jenny Schwarz (@schwarzmenswear or JennySchwarz.com), who also drafted the patterns for me.
Posted by Mathemaknitter at 08:05 No comments:

Email ThisBlogThis!Share to TwitterShare to FacebookShare to Pinterest
Labels: me-made

A Shortcut to the Perfect Dress

I have had a lot of trouble finding patterns for dresses that felt like me, and the ones I did like were often made out of fabrics I didn't want to care for.

(Ironing. I don't do it. I only purchased my first ever iron after deciding that I would take up sewing.)

A lot of popular sewing designs that are simple to make are also loose around the waist, which is a style I particularly dislike to wear. I feel big and heavy in them no matter what, and I generally prefer my clothes to be cut close to my body.

Most of the things I did like were impractical for me to make and imperfect for my wardrobe.

The perfect dress would allow me to ride my bike, be a simple backdrop to my hand knits, and have a fairly fitted silhouette.

I just felt stuck. I hated the thought that the first few things weren't going to be things I LOVED.

I looked up a bunch of sewing classes, and wrote some emails to a couple of places, asking if they would be willing to help.

But it was actually when my beautiful coat's lining was torn that I found the perfect person.

We talked, and she drew up some sketches and made some toiles. She did all the drafting, and she's now coaching me through making the first pieces.

I'll write more about my perfect dresses soon. I'm finding that I'm actually struggling to write as much as I thought I would when I purchased the domain name.
Posted by Mathemaknitter at 04:45 No comments: 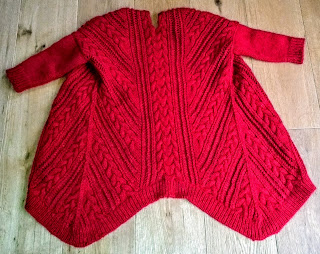 Another sweater by Olga Buraya-Kefelian!

This gorgeous oversized sweater coat was originally designed to be longer, but I'm pretty short and I wanted something I could safely cycle in without snags, so I made it shorter.

I, uh, did not swatch, but just cast on the smallest size. For the body, the only modification I made was to knit fewer rows in the cabled/lace pattern because it would have been too long to cycle in otherwise.

I added a row of plain knitting to the shoulders (both front and back) before doing the three-needle bind off for a little added structure. It actually also looks much nicer this way. I do plan to reinforce the shoulder and bought some cotton webbing for it.

I also knit the sleeves in the round, and I made them quite a bit smaller because I have skinny arms.

Instead of a crochet cast on, I used a tubular cast on for the ribbing. I also used Tech Knitter's trick to make the transition of ribbing to stockinette look nicer, and I'd definitely recommend doing that. Very little extra work for quite a bit of pay off.

This is a garment that needs seams, and the bigger and longer you make it, the more it'll need them. I wouldn't recommend changing it to be worked in the round.

Closeup of the right side. I did this one second, so it looks nicer than the other side.

I spent an entire day seaming this, to make sure the sleeves set right and the pattern was aligned. Totally worth it!

Leftover Zealana Artisan Heron in colour Red Chilli. I originally bought 16 balls because I was afraid I would run out.

The yarn is Zealana Artisan Heron, which is a 80/20 merino possum blend.

I really love the resulting garment, but I did not enjoy knitting this yarn. It's very stiff, and it made it impossible for me to do the cables without a cable needle. It's also worsted, which I don't typically like knitting anyway.

The stitch definition is very nice, and it spit splices like a dream. It feels very sturdy, and only broke once during seaming despite the number of times I ripped them out and reused the yarn.

This yarn gets softer with wear. I was kind of disappointed when I first put it on because it wasn't as soft as I had hoped. But I've been wearing it for a few days now, and it's much much nicer than right after I seamed it. So don't despair! 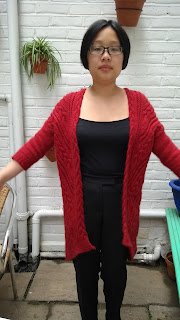 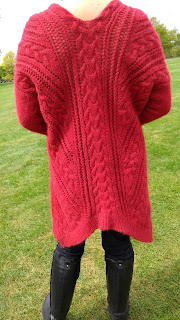 Apex with knee-high boots! This is a really great combo.

This is a beautiful garment that is comfortable to wear. It works from house coat to nice cardigan over tailored clothes for work, and everything in between. Definitely be a great travel piece too.

I would recommend picking a yarn that would be comfortable at a variety of indoor temperatures. I'm a little concerned that mine will be too warm indoors, but the generous open front and reverse v-neck makes it a bit impractical outdoors.

I really love this garment. I am seriously considering making another one already, and to be honest, the more I wear it, the more I want another one. :)
Posted by Mathemaknitter at 11:24 No comments: